Once masters of the Plains of Panish to the east, the golden-maned, feline litorians were scattered in the Wars of Fire thousands of years ago. Small prides hunt here and there in the wilderness, and occasionally a litorian attempts to fit into a human culture.

Litorians are bestial, honor-bound hunters. Usually found roaming open grasslands far from civilization, litorians only rarely separate from their tribes. Unlike members of the common races, only the unique individual litorian interacts with other species. 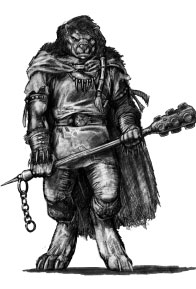 Personality: Litorians are thoughtful and quiet until provoked past their limit. Once angered, they become savage and brutal, almost incapable of showing mercy.

Litorians love the outdoors, good food, and long, well-considered stories (not boastful or exaggerated ones). They have a deep sense of personal honor—personal in that it’s not about “saving face” but about being true to oneself. A litorian will not compromise her morals for fear of losing her own self-value, even if this makes her appear strange or foolish to others, and even if it means making a choice others might not consider the best one. All litorians develop their own sets of morals and ethics, although some principles remain true across most members of the race. Because they highly value both honor and life, for example, their need to repay those who save their lives—a lifedebt—is very strong.

Physical Description: Litorians are taller and more muscular than humans. Their bodies are covered in light brown hair, and their faces are clearly feline in appearance with a pronounced snout, a flat, catlike nose, and sharp teeth. They have dark eyes with narrow pupils. Manes of brown hair surround the heads of males. Most people notice a thick, almost musky scent around litorians, but few think it unpleasant. Litorians mature much faster than humans, but have a similar lifespan.

Relations: Litorians have little history with most other races except aram, whom they respect (but do not entirely understand). In Ptolus, they get along best with halflings, who surprisingly share many of their sensibilities regarding loyalty (this may come from their similar nomadic lifestyles). They get along with the Ornu-Nom tribes of orcs in Palastan and Rhoth fairly well, but not with the Toruk-Rul or Sorn-Ulth.

Alignment: Litorians lean toward chaos rather than law simply because of their tribal upbringing. They believe in only a very loose organizational structure. Litorians organize their tribes by strength and respect, not by law. Litorians find the concept of delineated parameters of right and wrong difficult to understand; they are much more likely to judge situations on a case-by-case basis. Bound by their sense of honor and respect for others, far more litorians are good or neutral than evil. They are very rarely selfish or cruel and hold concepts of personal freedom quite dear.

Litorian Lands: Litorians are nomads, but to call their wandering “random” shows a profound misunderstanding of their culture. They subtly control the open grasslands upon which they wander: Their power and cunning makes them clear masters of the region they inhabit. No one passes through the plains where they live without their knowledge—and, therefore, their leave.

Religion: Litorians have no concept of worship and see little need for ritual. They simply do not understand or crave the need to trust in a higher power. When confronted with proof of a powerful being’s might, a litorian grants respect, but not reverence.

Language: The complex litorian language proves difficult for humans and many others to speak. It is a tongue full of deceptive subtlety, and few non-litorians attempt to master it. Litorian has an alphabet of its own, but by the standards of other races, its written form is fairly crude and basic.

Names: The tribe gives all litorians names that carry a special meaning in their own tongue. These names are then transliterated into Common for use by others who have difficulty with Litorian speech. Here are some sample names:

Adventurers: Litorians away from their tribe are usually hunters, mercenaries, or members of another profession that allows them to use both their outdoor instincts and their natural strength and agility. Frequently shunned by members of other races (because they find the “lion-people” intimidating), litorians often find acceptance and friendship among adventurers—many of whom are loners or wanderers themselves.

ROLEPLAYING LITORIANS
Litorians are impressive in stature and in their honor-bound nature. Anyone who calls them “cat people” doesn’t understand them at all. With due respect to cats, these are not self-interested, aloof felines, but proud warriors and hunters who are principled and thoughtful in their actions.

They ascribe high importance to the well-being of their allies, their families, and their people. Also, do not dismiss them simply as primitive hunters. The litorians have been around as long as the elves and know much about the major races and the cities they build. The litorians, however, have rejected the ways of the other races to embrace their own. These noble people value personal honor very highly. They also closely guard their image in society. Litorians teach their children that to be caught in a lie, to be seen as a failure, or to be called a coward are all fates as bad as death. Taking this ideal to the extreme, some litorians almost never speak, attempt only what they are good at, and never turn from a fight, no matter what the odds. Most litorians, however, realize that intent matters more than action. Abandoning a fight is not cowardly when one has no chance of winning. There is no shame in failing at an impossible task. And a statement is never really a lie if you believe it when you say it.

Other things, however, can shame a litorian as well: associating with honorless people, betraying a friend, dishonoring one’s parents, failing to repay a debt—or worse, failing to recognize when one is in someone’s debt. Anyone who saves the life of a litorian usually finds that litorian swearing to aid him in a great task. Litorians have a strong sense of lifedebt and will go to great lengths to repay their saviors. When you play a litorian, carefully consider your actions. When you make a friend, stick by that friend no matter what. When you make an enemy, strive against that enemy with all your might. And thus do neither lightly.