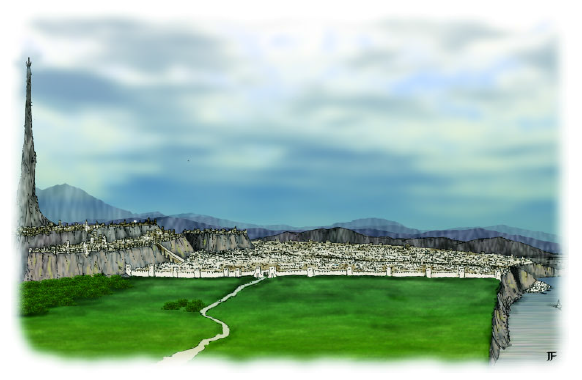 The Spire reaches three thousand feet into the sky, a pinnacle of dark grey rock that grows darker as it rises; the top is pitch black. It is a wholly unnatural creation and anyone gazing upon it knows it — the Spire is simply too impossibly tall, too incredibly thin. It is very broad and surprisingly flat on its eastern side, making it perfect to build a fortress and eventually even a city upon. The western side is rougher and more sheer.

Two other fortresses are associated with the Spire, in addition to Dalenguard at its base. Approximately halfway up, built into the side of the Spire and perched on a rocky shelf almost certainly created by magic, lies Goth Gulgamel, a disturbingly featureless castle of twisted black stone. At the very top of the Spire rests Jabel Shammar, an equally black fastness of stone and iron with three tall, pointed towers surrounding an even taller, dagger-like spike of dark metal.

Most people say they find the Spire disturbing to look upon. Many folks tell dire tales of demonic sculptors; angry gods impaled after a war in the heavens; and black spears thrown down from the Lunas moon. One hears equally sinister tales of what lies in the fortress at the top of the Spire, whose name is slowly fading from the public consciousness (most people just call it the “fortress at the top of the Spire”) along with its history. Some even doubt there’s a fortress up there at all—they say it’s just a rock formation. Still, no explorer-mages with fly spells or brave souls with other means of flight have ever returned from a trip there.

Goth Gulgamel people do remember, but only as “the fortress of Ghul.” Given that the threat of Ghul has been over for seven hundred years, even his memory is starting to fade, though. People remember that he was an evil conqueror, and that’s about all.

Over time, new Ptolus residents start to ignore the Spire. For one thing, the skies are often so overcast that dark clouds often obscure most of it. For another, one eventually grows inured to fearing that some supernatural foe will emerge from the Spire to devour the town. People don’t want to think about what might still linger in the Spire fortresses, so they don’t.